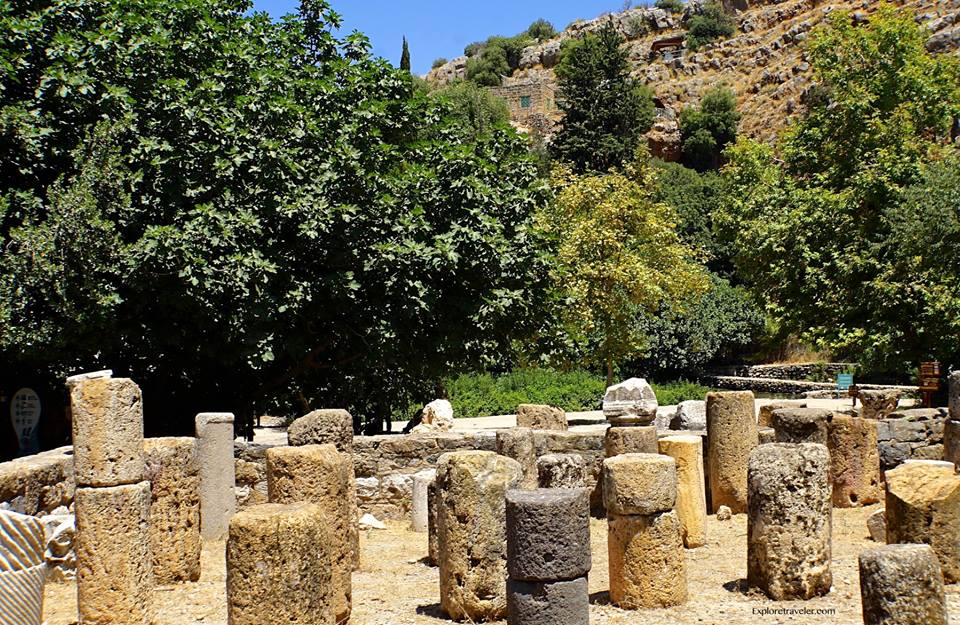 Ruins Of The Agrippa Palace In Caesarea Philippi

Caesarea Philippi was an ancient Roman city at the Southwestern corner of Mount Hermon. It is near a spring with awesome water, a grotto, and many shrines that lay near by in ruins. This is a ruins of a high place that was dedicated to the Greek god, Pan. This archaeological site is for the most part, uninhabited, and lies sleeping in the Golan Heights.

Latter Caesarea Philippi was called Caesarea Paneaus, dedicated to the god Pan, and again the name mutated during the Hellentistic  and Islamic periods to become Banias. Banias is what the archaelogical site is known by today.

During the early Christian err, Paul spoke to those in authority about His walk with the Lord, at this very place. He chose this as a time and place to give testimony as to his walk “after the way.”

14 But this I confess unto thee, that after the way which they call heresy, so worship I the God of my fathers, believing all things which are written in the law and in the prophets:

15 And have hope toward God, which they themselves also allow, that there shall be a resurrection of the dead, both of the just and unjust.

16 And herein do I exercise myself, to have always a conscience void to offence toward God, and toward men.

17 Now after many years I came to bring alms to my nation, and offerings.

18 Whereupon certain Jews from Asia found me purified in the temple, neither with multitude, nor with tumult.

19 Who ought to have been here before thee, and object, if they had ought against me.

20 Or else let these same here say, if they have found any evil doing in me, while I stood before the council,

21 Except it be for this one voice, that I cried standing among them, Touching the resurrection of the dead I am called in question by you this day.

22 And when Felix heard these things, having more perfect knowledge of that way, he deferred them, and said, When Lysias the chief captain shall come down, I will know the uttermost of your matter.

23 And he commanded a centurion to keep Paul, and to let him have liberty, and that he should forbid none of his acquaintance to minister or come unto him.

24 And after certain days, when Felix came with his wife Drusilla, which was a Jewess, he sent for Paul, and heard him concerning the faith in Christ.

25 And as he reasoned of righteousness, temperance, and judgment to come, Felix trembled, and answered, Go thy way for this time; when I have a convenient season, I will call for thee.

26 He hoped also that money should have been given him of Paul, that he might loose him: wherefore he sent for him the oftener, and communed with him.

27 But after two years Porcius Festus came into Felix’ room: and Felix, willing to shew the Jews a pleasure, left Paul bound.

More ruins of the Agrippa Palace looking out toward the fields. Notice the columns that were so prevalent during that time period. Many of the lower parts of the walls are still standing. 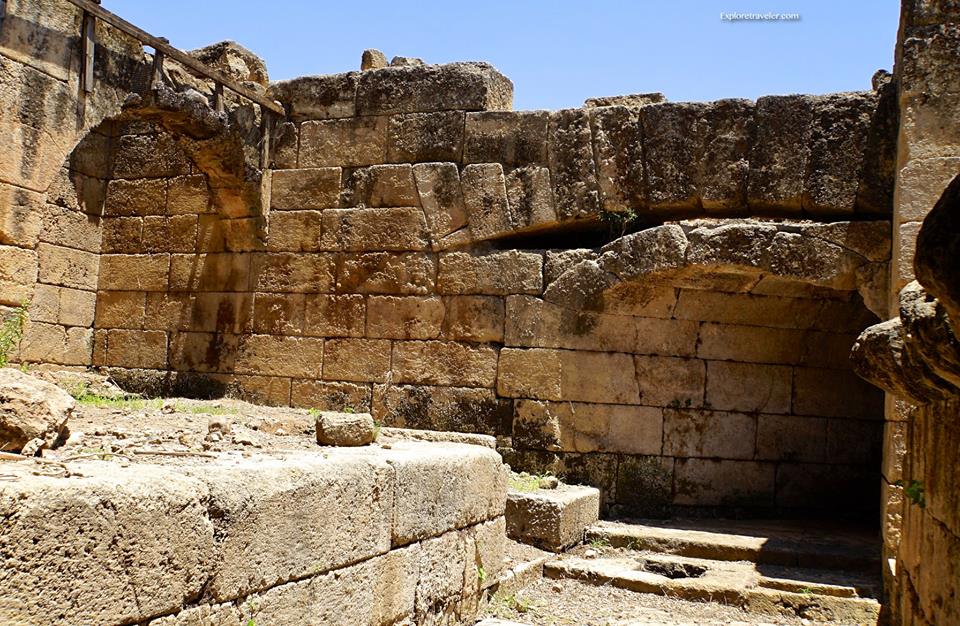 More Scenes From The Ruins Of Agrippa Palace

Here you can see the rounded archways that also were a major component of this time period. Again, much of the doorways and walls are still standing. 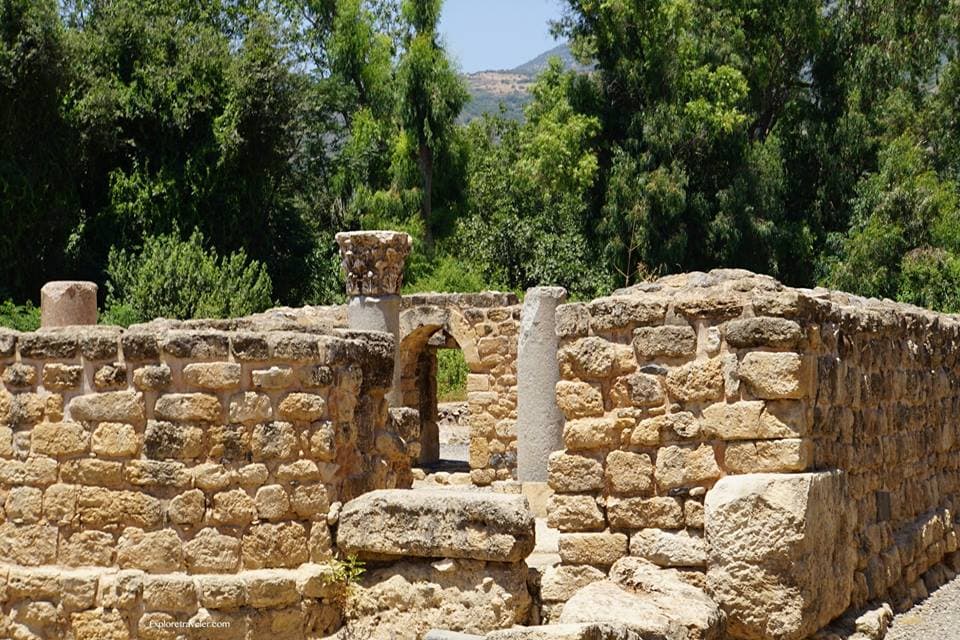 You can see what appears to be an outside entrance going out into a garden of some kind. One of the unique experiences of this site is to have the opportunity to explore and imagine what it was like back when it was a thriving city. This was a major palace in a major Roman city. 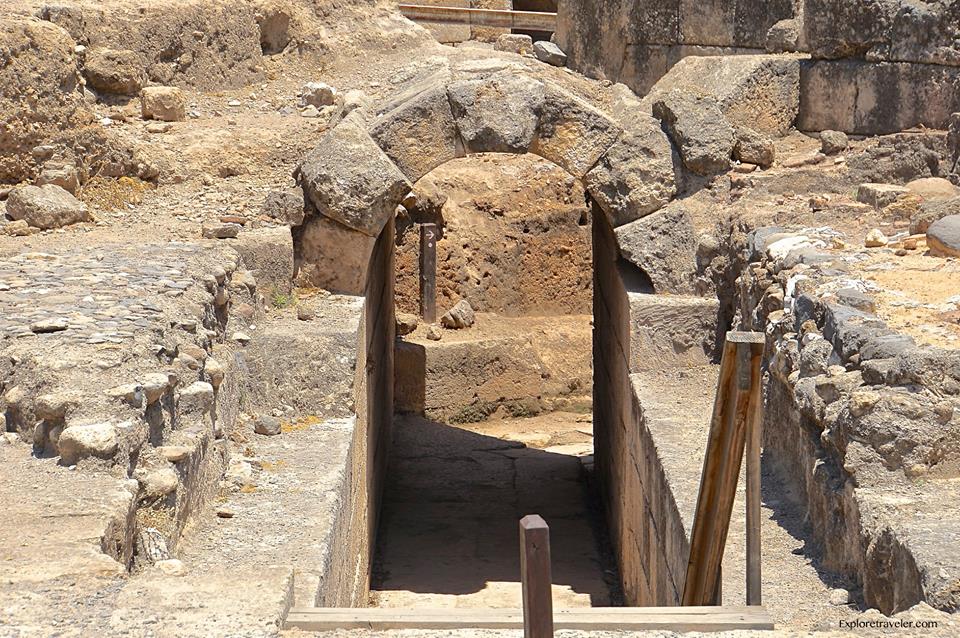 One Of The Doorways Of The Ancient Palace

At this time, Caesarea Philippi is an archaeological site of major interest for those who desire to climb, and discover  the ancient ruins of yesterday. This site currently lies within the Hermon Stream Nature Reserve. As you walk through the ruins you can spot the old layouts of the palace, a bath-house, and even a Byzantine Synagogue. There is even a main North-South street, called a Cardo in ancient Roman cities. Cardos were a main part of ancient Roman city planning. 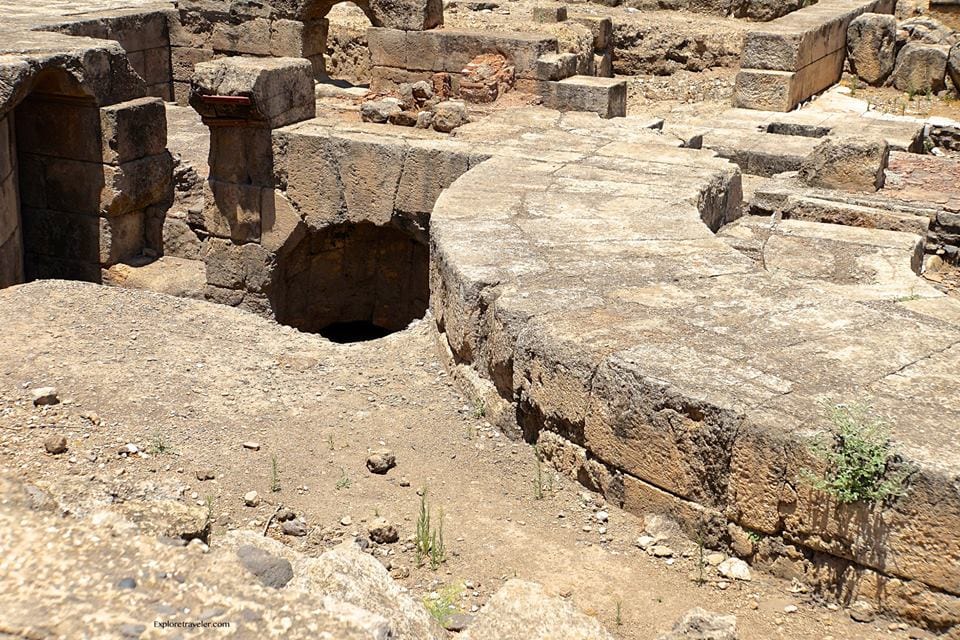 Possible Remnants Of The Temple Of Pan

In the world of Greek mythology, we come across the god, Pan. Pan is the god of all things wild. He was said to have cared for the shepherds and flocks of the region, as they roamed free and wild from place to place. This Greek god is said to have “the hindquarters, legs, and horns of a goat.” He was said to roam the mountain wild places, and adore mountain rustic music. In some places, Pan is connected to the goddess of fertility.In our own society we see that the word panic comes from the name of this Greek god.

One of the cave openings was known as the “Gates of Hell.” Though Caesarea Philippi was green and lush, it was a center for worshiping pagan Greek gods and goddesses. The primary god of the area was Pan, which the city was named after during the time of the Greeks. To the pagan way of understanding, these openings that went down to caves were a part of the underworld that was called the “Gates of Hell.” Detestable acts of worship took place in these caves, as they worshiped their gods. Major orgies and other sexual activities were said to have taken place in the caves. They believed that Pan, and the other gods, lived there during the winter and used the caves as a way of coming back to the community during the spring time. The nearby spring was considered a symbol of this underworld.

Some of the caves were over 800 feet deep, and the bottom has yet to be discovered. It is thought that these deep caves were used to drop the dead animals into that were sacrificed to the god, Pan. When blood was seen further downstream, they knew that the gods had accepted their sacrifice. 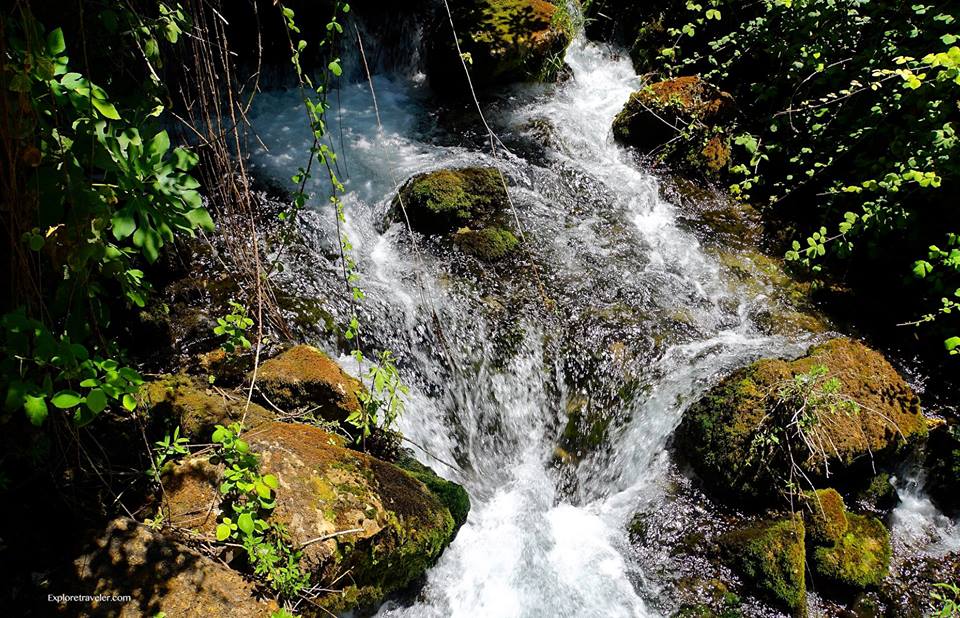 The spring went directly in front of the Temple of Pan, between the temple and the grotto. Such a beautiful spring, to have such a detestable past. This spectacular spring came out from under the cave used for pagan worship. It was one of three water sources that formed and filled the River Jordan. A short distance from here, it also forms into a magnificent waterfall. The cave was filled with small pebbles during an earthquake and the water no longer comes out from the cave, but rather flows out in front of it. Today, it is a beautiful small river.

Many years latter the Romans conquered the territory, giving the city the name of Caesarea, but it remained the hub for pagan worship. The people of the city would carve niches into the cliff, where they put statues to their many gods. 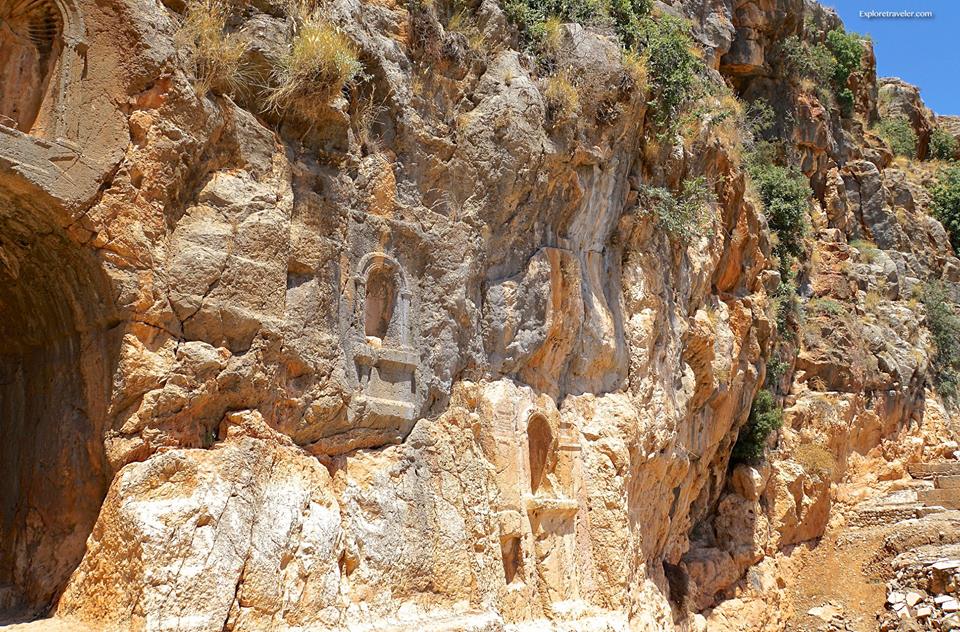 Each one of these niches, carved into the cliff, was home to one of many Greek gods. The Greeks had a god for everything, they even had one to an unknown god. Just to be on the safe side, they worshiped this unknown god, for fear of missing an important god and making him angry. But by far, most of the niches were filled with hand-carved wooden statues of Pan, a Greek fertility god. Pan was the most important god of that time in Caesarea. 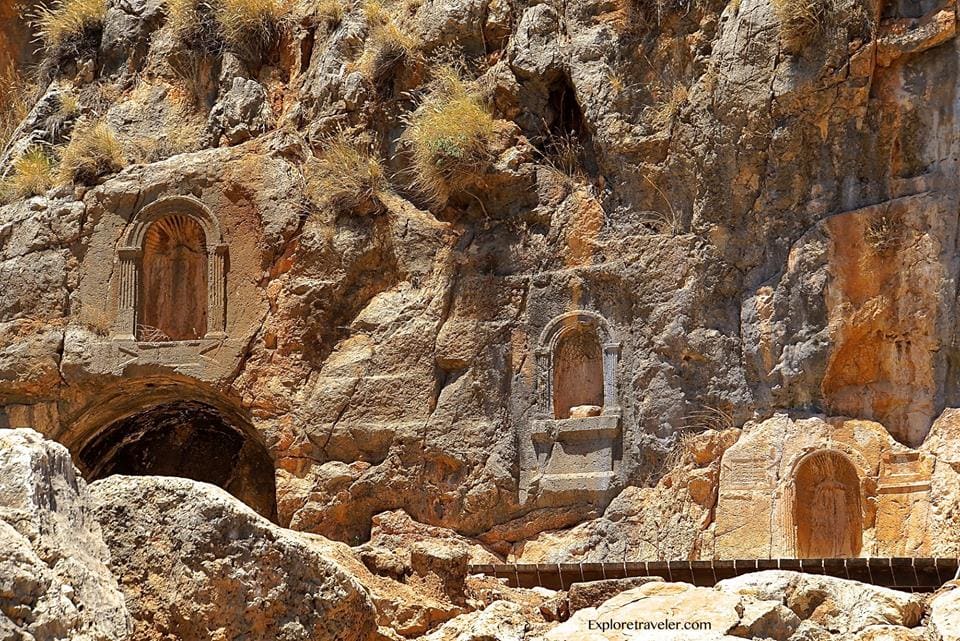 A Cliff Dedicated To Pagan Worship

This is a close-up view of the niches which held the wooden statues. Notice that they have been carved with care. They are done with skill and great devotion. 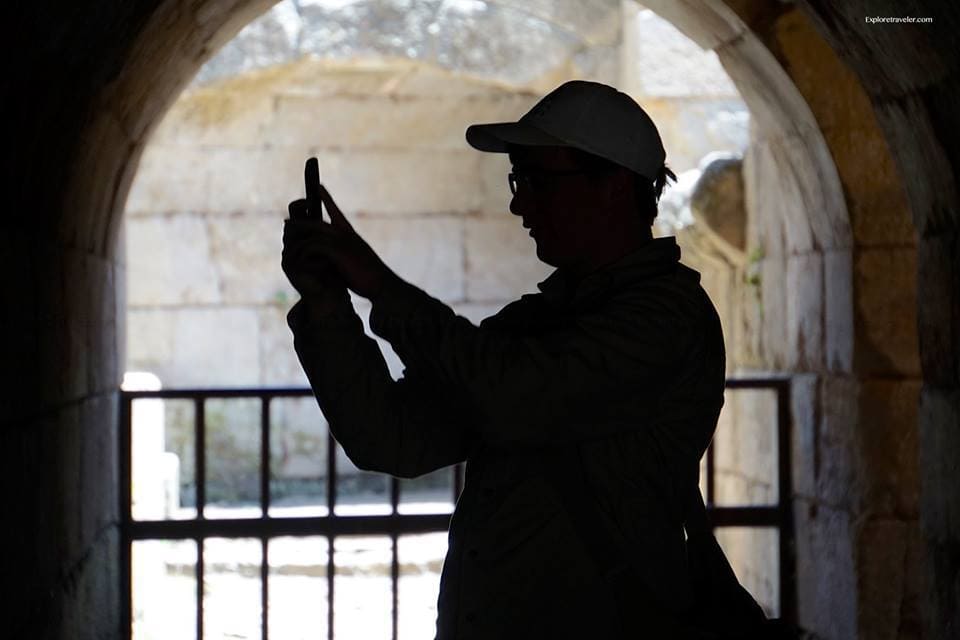 Adventurer Taking Photos From Out Of The Shadows Of Yesterday

Adventurers will find that Caesarea National Park is an impressive archaeological site. The harbor has been restored to show forth its former glory during the time it was being built by King Herod. This is one of Israel’s marvelous sites waiting for you to explore. There is also a museum which has many different media forms explaining the history of this ancient and magnificent port. The museum is open from April to September from 8 am till 6 pm. In the winter it is open from 8 am till 4 pm.

The Caesarea Amphitheater has been completely restored and throughout the year there are concerts and other productions held here at the harbor. Photographers find endless hours of enjoyment taking photos of all the exciting parts of this archaeological site. Those that enjoy walking and climbing can spend hours discovering all the various areas of this spectacular site.

Just outside the National Park is one of the nicest beaches in all of Israel. A harbor is a great place to enjoy the sunset or to catch dinner at one of the many harbor restaurants. The modern town of Caesarea is close by for places to stay close and the ancient city of Joppa is only around 33 miles away. There are many fabulous boutique motels that are amazing and the service is excellent.

Why not make this the year that you choose to have an archaeological adventure in Israel? There are many archaeological sites to discover, and Caesarea is an excellent place to start your adventure.

When researching and studying Agrippa Palace In Caesarea Philippi we used the following search terms. Keep in mind that we were there, and did have material from when we were onsite. These additional search words can provide you with additional material for a paper or academic research. Additional information her wikipedia.org Caesarea_Philippi can also help with your research.

Masada Adventure In The Judaean Desert

rulers of the roman empire