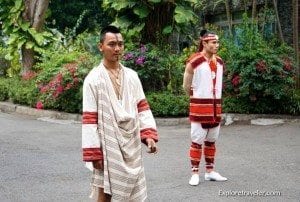 Seediq People, a tribe from the Puli mountain area, was officially recognized as Taiwan’s 14th indigenous tribal  group on April 23, 2008. Seediq people are made up of three recognized sub-groups: the Tgdaya , the Toda , and the Truku. The Seediq traditionally have called the border area home that lies between the counties of Nantou and Hualien. This is a fantastic area to explore. Until their recognition in 2008, they were considered a branch of the Atayal Tribe. Because of what some believed to be major linguistic and lifestyle differences, they were given complete Tribal recognition in 2008.

The weaving skills of the women produce some of the best aboriginal crafts in Taiwan. These ancient weaving skills are being kept alive today. The older women of the tribe are skilled weavers. They are handing down the skills to younger women. Their work is magnificent! When in the area look for their work. Though a small tribe, they are world renown  for their weaving! Many gift stores carry hand woven garments made by these skilled women. Don’t forget to look for their handiwork to give as gifts , or to take home. It is fantastic!

Currently, there are 14 recognized tribes and 11 unrecognized tribes in Taiwan.  Most of indigenous population  live in the mountainous and coastal area of the main island. The Indigenous Peoples of Taiwan make up approximately 2% of the total population of Taiwan.  It is believed by many scholars that Indigenous Peoples inhabited the island approximately 8,000 years ago. This was long before the Han Chinese migration from China  which began in the 17th century. The Indigenous People have been gaining skills in tourism and this is a fun area to explore. Take time to join a tribe for dinner! It will be a delightful experience.

The Seediq Tribe only became well-known with the production of the movie, “Warriors of the Rainbow: Seediq Bale”, a sensational drama adapted from the historical events of 1930.The movie was adapted from the famous Wushe Incident. The Seediq tribal people in the area of Taroko attacked the Japanese in response to their long-term oppression.  The Wushe Incident caused 130 Japanese deaths. Over 1,000 Seediq people died in the crackdown of the Japanese.” Warriors of the Rainbow Seediq Bale” brought the Seediq people much attention and recognition. There are many disagreements of the accuracy of the historical drama. It is considered to be on the same level as “The Last of the Mohicans” a 1992 film.”Warriors of the Rainbow: Seediq Bale” is the most expensive movie to be produced in Taiwan. The drama premiered at the 68th Venice International Film Festival. It was Taiwan’s entry into the Oscars. It received two awards at 84th Academy Awards. It won the 48th Golden Horse Award and the 2012 Asia-Pacific Screen Award. Though it is not a light movie to watch, it is worth watching for the overview of the history of the  area. Grab the popcorn and enjoy.

“Warriors of the Rainbow:Seediq Bale” can be viewed at:

http://vios.us/hd/play.php?movie=2007993   (Run Time is 4 Hours 36 Minutes) There is major violence in the drama and viewer discretion is advised. It is not appropriate for young children.