Bacon On My Plate Please 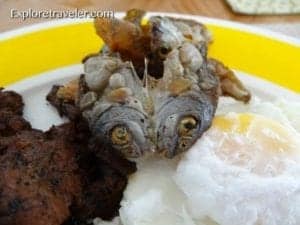 Bacon And The Good Life

Bacon mania is everywhere! Paired with  eggs, it is perhaps one of the favorite American breakfasts. The average American eats more than 18 pounds of bacon during the year. This statistic does not take into consideration the Americans that do not eat any Pork at all. Many Americans are on pork free diets for health or religious reasons, plus all the Vegetarians and Vegans. Subtract these from the numbers and you will see that Americans love their bacon. The average American probably consumes almost double what the statistics show each month. How did bacon get to be so popular? What is the story behind this breakfast meat?

It’s not like this breakfast meat is the new kid on the block. It is not a new product. This meat dates all the way back to the Roman Empire. During Roman times, it was called “petaso.” It was cheap and easy to cook. Petaso  was simply domesticated pig meat. It often was boiled with figs, browned and seasoned with a tasty pepper sauce. And there you have the first bacon. From the beginning it had a history of being easy to prepare , available year around, and easy on the budget. It is considered by many cultures to be appealing to the palate.

During the 1600’s, European peasants found that it was easy to produce, and was a very cheap source of  protein. Smoked bacon was considered to be the best. During this time, bacon became a household stable among Europe’s peasant population. Often just a small amount was added to different dishes to bring out the flavor.

During the 1770’s, John Harris, an Englishman, started the first major industrial bacon manufacturing plant. He opened his company in Wiltshire, England. This area of Southwest England is still the pig capital of the entire world.

The Oscar Mayer brand began as a family business in Chicago’s east-side  in 1883 by a German immigrant. This new company grew rapidly. The company grew fast and was setting itself apart from other meat companies. In 1924, it introduced packaged sliced bacon to America. Bacon on my plate was becoming an everyday experience in many American homes.

In the 1990’s  a Texas Business owner, Frank Sodolak invented the Chicken Fried Bacon specialty dish. What is Chicken Fried Bacon?  Take raw bacon, dip it in a batter, and then deep fry it. Maybe not too healthy, but well-loved by Texans and anyone else who has had it. If you like pork, you will like this Texas treat.

Now we have already established that America loves her bacon. But in 2009, out of San Francisco came the Bacone. The famous Bacone held center stage at the 2009 Bacon Camp held in San Francisco, California. It is made with fresh cooked  bacon formed into the shape of a cone. Then you fill it with eggs, hash browns, cheese, and a layer of fresh country-style gravy. Top the cone with a fresh-baked biscuit. All this for only 500 calories.

With all these unique ways to eat this breakfast meat, and many others not mentioned, it stands to reason that good bacon requires good pigs. In America alone, over 2 billion pounds of bacon is produced each year.  The Yorkshire and Tamworth breeds have been bred to be the best bacon pigs in the U. S. A.  Over 70% of the this meat produced is eaten for breakfast. Up until after World War I, most cooks preferred fat from the pig for cooking in the U.S. At this time, packaged lard was readily available and cheap. Pair it with eggs and it is still an American all time favorite. Yes, I want bacon on my plate please!

Take a road trip and try all the many unique and tasty treats made with this all American meat. This would be the best year to take an all American Bacon Road trip. How many ways can a country eat bacon? Eggs over easy, and double the bacon please. It’s a small part of the American way.