Church Of Saint Joseph In Nazareth 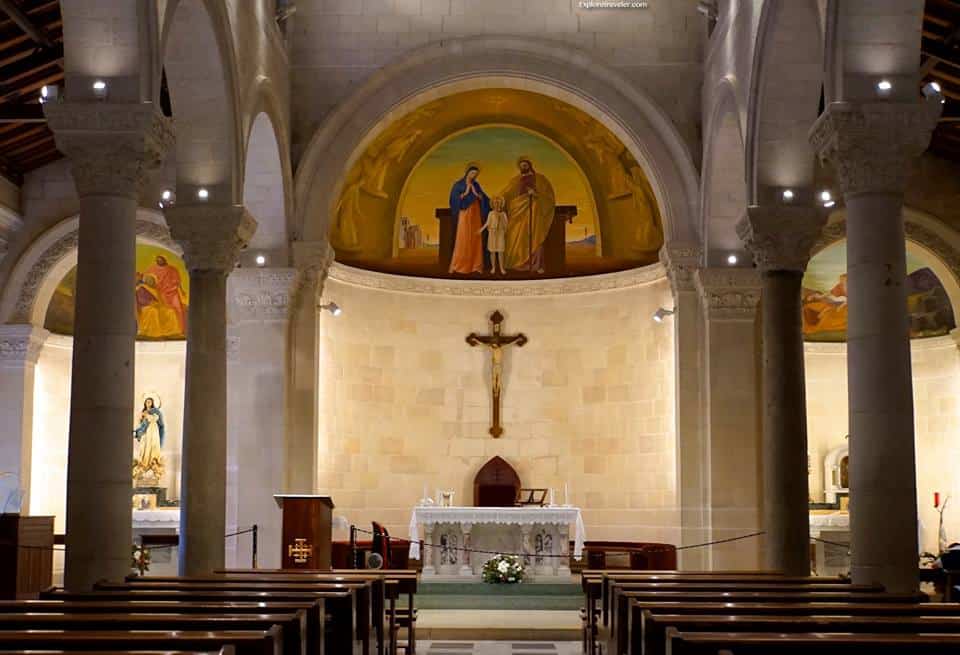 Church Of Saint Joseph In Nazareth

Nestled between the two churches is a large Franciscan convent. The convent is called Terra and means simply “Holy Land.”  In front of the Terra-Santa convent, near the entrance, are a small collection of relics that were found by archaeologists when the grounds were excavated. It is a fascinating collection  of artifacts letting you explore the time of the Byzantine and Crusaders. What an amazing and fun experience!

There is a fantastic garden between the churches belonging to the convent. Not only are there many beautiful plants and native trees in the garden, but several statutes. There is a large statue of a Franciscan Monk that is most spectacular. Also in the year 2000 a statue of the Virgin Mary was placed in the garden.

The Church Of Saint Joseph is a beautiful building with simple lines. It was built on the foundations of the ancient Crusader church.When you enter the sanctuary, you quickly see that it is tastefully done, but not ornate. It is very attractive and stylish. You quickly notice that there is a simple wooden crucifix in the center behind the altar. Sitting at the back is a plain wooden tabernacle where the Eucharist is kept. On the sides are several colorful statues and stained glass windows are all around. The windows are outstanding and depict the life of Jesus as a boy with his parents.There is a very large statue of Saint Joseph and several of the Holy Family and Mary that are extremely beautiful. Everything about The Church Of Saint Joseph is very unpretentious. It is a simple, but beautiful Church.

The altar area of the Lower Church grotto incorporates the remains of previous churches that were built over the Grotto Of The Annunciation. There is a simple chapel in the lower church and many artifacts were used in the making of the chapel.

Steep stone stairs lead down to a chamber located below the Sanctuary. Under the church is a series of rock-cut caves that were used by those dwelling there during the  Roman-period.  One of the rock-cut cavities was converted to a Baptismal pool with a mosaic floor. The Byzantine worship place of the church which was built over the early cave incorporated the Jewish style of immersion into their worship plan.  They had accepted the Jewish bathe commandment and built ritual baths in the church for this purpose.  Stone steps lead down into the baptismal on the left.This beautiful basin is 21 square feet. It is cut out of the rock. The floor of the basin is complete with  black and white mosaics.  It is an example of the beautiful architecture of the Byzantine period. This rather simple but beautiful basin is thought to be a baptismal site that was in use from before the time of Constantine. Like everything else, this site is uniquely simple and beautiful. It has been preserved with great care.

To the side of the basin is a flight of rough steps leads down to a narrow passage. It makes a turn and then opens into an underground  chamber that is  over 6 feet high.This is the opening to a chamber where there were grain silos and a water cistern. These had been cut out the rock by early Roman dwellers. Such underground chambers were typical of first century Nazareth.

If you continue further down some more stone steps, you will come out into a very narrow passageway. Continue through this narrow passageway and you will enter a modest underground chamber. It is believed that this modest facility was the carpentry shop of Saint Joseph. The shop is basic and without frills. You will see some of the carpentry tools that would have been used in the shop. There is also tools that would suggest that Saint Joseph also worked with stone. Think about it, this is where he worked day after day. Walk in the footsteps of Jesus, as he would have helped Joseph as he grew older. Immerse yourself in the history of the Holy Land. Explore the living history of the Church of Saint Joseph!

The Church Of Saint Joseph was constructed over these sites as a way to protect them from being destroyed in any way. Even though the churches themselves have been destroyed several times, the relics below have been kept safe. The Church of Saint Joseph is well worth coming to see. The lower area is like walking back into the First Century. It is an amazing experience! You will want to go down below the church to see the relics which are being protected. Walk where Jesus walked! Stop to pray! Admire the home were Jesus lived as a boy. A Nazareth Adventure would not be complete without a stop at The Church Of Saint Joseph.