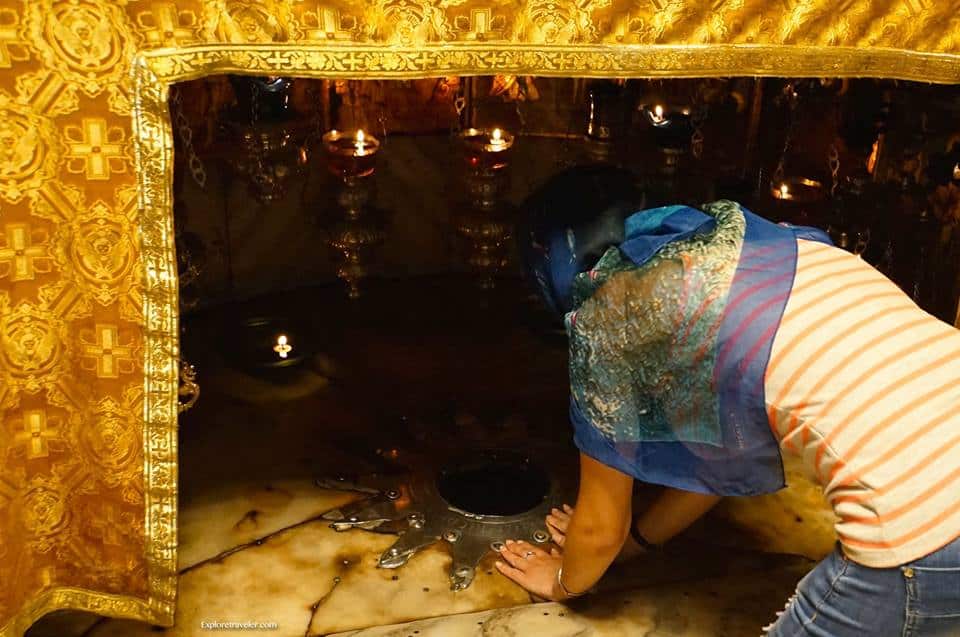 Pilgrims Come To Say Thank You

The Church Of The ‪Nativity‬ in ‪Bethlehem‬ is the traditional place recognized by Christians the world over as the place where Jesus was born. The Church of the Nativity is built over the cave where it is believed that He was born and laid in a manger. Pilgrims come to say thank you to their King. They come in referance. They come to pray. They come to worship.

The History of the church of the Nativity

Luke 2:7 in the Greek Scriptures renders a slightly different understanding of this humble birth than the English versions. The Greek can also be understood as saying: “she laid him in a manger because they had no space in the room.” It was the  custom at  the time to build one room houses in front of a cave that was then used for stabling animals in the night and storage for the family. Thus Jesus would have been born in this manger in a cave or back room of an overflowing small house. Historical accounts less than a century after the birth of Jesus say that He was born in a cave. We have two historical accounts that give witness to this traditional understanding in the writings of Justin Martyr and the Protoevangelium of James. Both Justin Martyr and the Protoevangelium of James say Jesus was born in a cave. This is the traditional mindset and for this reason, The Church of the Nativity is built over the cave where Jesus was born.

In the early history of the Church of the Nativity we come across the first evidence for this traditional mindset in the year 160 AD in the writings of Justin Martyr. This was the beginning of this cave being a place of worship in the early Christian Community. In the writings of Origen and Eusebius, we also see this same line of thinking in the 3rd Century.

In the year 326, Constantine and his mother St. Helena set about building the first Church of the Nativity directly over the cave where Jesus was born. This original church was finished and dedicated on May 31, 339. The original church was built in an octagonal shape directly over the cave. A wide hole over the cave was made and surrounded by a railing. The faithful could gather above and look down on this Holy Site. Here they came to worship. They came to remember. They came to honor Jesus. In this way the cave where he was born was protected for future generations of pilgrims, while allowing current pilgrims the opportunity to worship their king.

Portions of the current floor mosaics are actually from this original church built by Constantine. They are beautiful and fragil. That is the only part of the first Church of the Nativity to be in use today.

St. Jerome was a saint known to have lived and worked in Bethlehem from around the year of 384 AD. It is interesting to note that he was buried in the cave directly beneath the Church of the Nativity also.

The original Church of the Nativity was destroyed in the year of 530 AD. Justinian then built the larger church that is in use today. This is the oldest church in the world to be in current use. The Church of the Nativity is beautiful. This ancient church is magnificent in detail. It is done in humble elegance. No Israel adventure is complete without a visit to this Holy Site.

If you haven’t yet done so, this is the time to make your travel plans. Back your bag and grab your passport. It is time for an Israel Adventure.