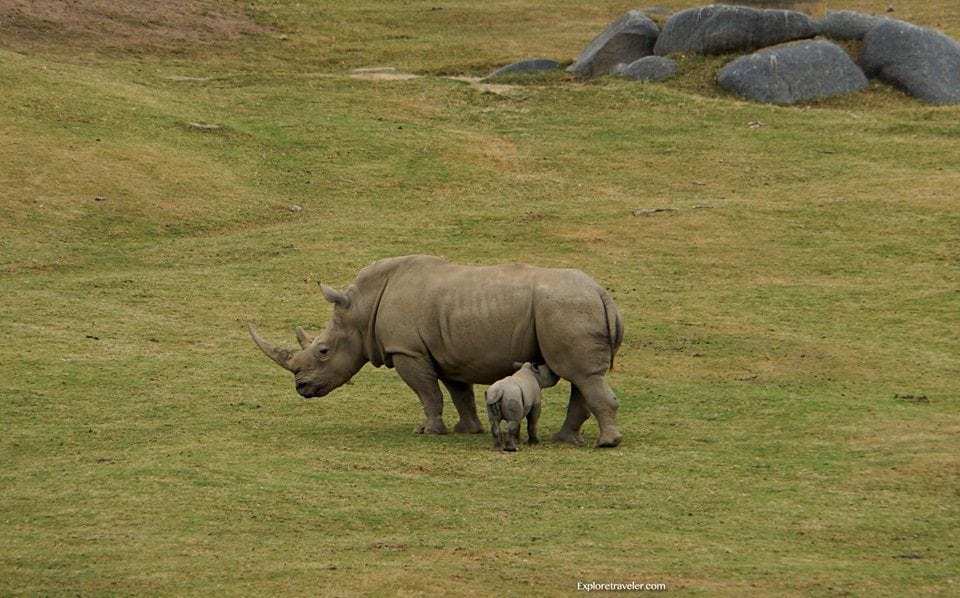 Southern White Rhino Born At The Zoo! Meet Kianga, born October 13th, 2015 to her mother Kacy and her father Maoto. What a bundle of joy she is, weighing in at around 120 pounds. In her native Swahili, Kianga means sunshine. She is definitely a bundle of sunshine!

She is the second calf of Kacy and Maoto. What a beautiful calf she is. She is healthy and very  rambunctious. This Southern White Rhino calf is on the go. Her energy level is very high and she is ready to explore her world. The San Diego Zoo welcomes Kianga!

Kacy is an excellent mother and Kianga is thriving under her care. She is very easy-going with the other Rhinos, but is making sure they keep a safe distance. She is quite protective of little Kianga. This little Southern White Rhino is so blessed to have such a caring mother. Not even her father, Maoto,  has been able to come near. For sure, no rhinos are allowed near Kacy’s baby, not even daddy.

So what is in store for Kianga these next few years? For the first year Kianga will nurse from Kacy. During this first year she should gain around 100 pounds each month. She will not be considered full-grown until she is three. As she grows, she will learn to graze on grasses. She will also learn to keep her enormous head and lips very near to the ground. By the time she is three, she will have gained her full adult weight. By the third year she should weigh between 4,000 and 5,000 pounds. Now that is one hefty teenager ready to make it on her own!

Rhinos in general are considered Ambassadors from the past. They have a very ancient lineage. Their ancestors are believed to have existed millions of  years ago. Some believe they walked the earth 55 million years ago. What a family tree this little Southern White Rhino has!

There has been over 100 species of rhinos known in the world. Now, there are only five. Two live in Africa and 3 in Asia. All rhinos have two massive horns, and very wide chests. Their skin is very thick, but can be easily damaged. They have very horrible eyesight, and have been known to charge because they are not sure what is happening. They have very keen hearing, however. One of their greatest pleasures is rolling in the mud. No mud, no problem! A good dust bath is awesome also. The mud and dust protect them from the sun and from insects. Now that is frugal preventive medicine.

So what is keeping you from having a Southern White Rhino Adventure at the San Diego Safari Park? Visiting the Rhinos is easy and fun. And of course while you are there, you will want to meet the rest of the clan at the Safari Park. Grab the kids and head for the zoo. Explore the vast African Plains and the amazing Asian Savanna, What fun it will be! You can do it all this, on motorized trikes. What fun for the whole family. The older members of the group have no worries. The motor will do most of the peddling for you. The tour comes complete with a guide and lasts a little over an hour. This will be a true family fun time at the zoo.

The San Diego Zoo has many places you can observe the animals. You will also find trams, where you can see it all from the air. And of course there are Safaris. There are many choices at the zoo. Adventure is waiting! No need to wait a day longer. Pack the kids in the car and head for the San Diego Zoo. This will be a fun day of exploration and adventure. And while you are there, say hi to our newest Southern White Rhino, Kianga.