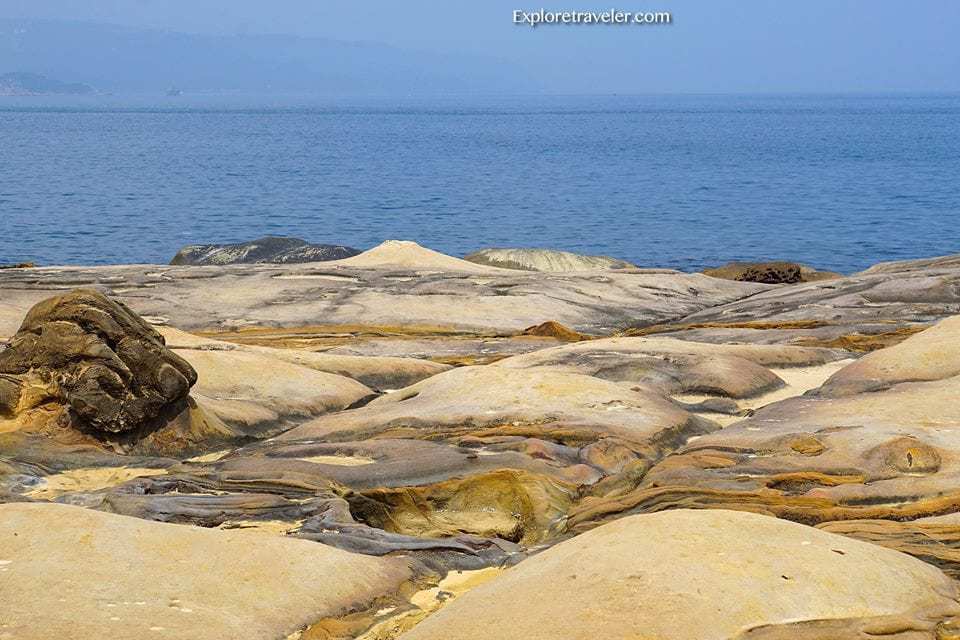 Yehliu Geological Park is a geological wonderland. Weathered sandstone is so artistic, that you can ponder who was the great artist. At the stroke of the brush, nature created this amazing area. You will find it near the seashore of Northern Taiwan. Wind, water, waves, and the shifting of the geological plates under the earth, designed a masterpiece in time. What a geological landscape! It is amazing! Nothing in the world is like Yehliu Geological Park. Here you will see Ginger Rocks and Mushroom Rocks. The amazing Queens Head has become a symbol of Taiwan. It is the unofficial emblem of Wanli.  Other curious and rare formations are Fairy Shoe, the Beehive, and the Sea Candles. Yehliu Geological Park is rare and priceless. It is stunning! The only limit to adventure is your own imagination.

Among the famous rocks found in the Yehliu Geological Park, are the “Ginger Rocks. ” Laced among the weathered sandstone, are these rare and exquisite Rocks. Yehliu Geological Park has millions of these extraordinary formations. “Ginger Rock” is nothing more than rocks which appear to be pieces of ginger. How amazing it is to see these extremely rare geological shapes. They are influenced by the waves of the ocean and the natural weathering of the rock. Each movement of the earth is precise. It brings forth treasure. Formations such as the “Sea Candles” are formed as the plates of the earth move and cause friction. How rare Yehliu Geological Park is! The weathered sandstone is remarkable. The rock formations are phenomenal. What a unique geological landscape. Adventure is at every corner of the park. Excitement is in the air. Take a picture! Go for a hike! Name the nameless! Weave a story!

Three Distinct Areas In The Park

The first area of the park is packed with rare and amazing Mushroom and Ginger Rock. The extraordinary Ice Cream Rock and Candle Rocks are also present among the weathered sandstone. Yehliu Geological Park is full of staggering discoveries in this first area. Gaze at the shapes! Begin to discover!  Name the un-renowned. The fun begins with the imagination.

The second area of the park is also centered around Ginger and Mushroom Rocks. Though they are not as prevalent. Here you will discover Queen’s Head, Dragon’s Head, and many others waiting for names. Take a picture! Choose a name! Weave a story! Also in this area, you will find Fairy’s Shoe and Elephant Rocks. Earth Rock and Peanut Rock round out the area. What fun! Take a hike! Enjoy the results of many years of corrosion.

The third area is the wave-cut platform. It is on the other side of Yehliu Geological Park. It is nestled in among the steep and treacherous cliffs. This area is at the seashore, where the waves can be wicked. The Torrential waves have formed amazing shapes. Some are grotesque and others magical. When entering this area, read the guide-book and follow the guidelines for a safe and pleasant visit. Discover such shapes as Pearl Rock, Marine Bird Rock, and Piety Hill. Yehliu Geological Park is exciting!