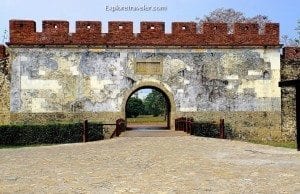 Old Fongshan City Wall is  located in Zuoying District, Kaohsiung, Taiwan. The old city of Zuoying, also known as Fongshan was the first walled city in Taiwan.  It is complete with a moat. What a fascinating city in this unique country! This defensive wall was built back in the Qing rule period. It was the first Taiwan city  to be so fortified. It also has a moat! Notice how sturdy the wall was built! It is amazing that the Old Fongshan City Wall is still standing today, though it has be renovated a couple of times.  You can still see the Old Fongshan City Wall in modern Zuoying, Kaohsiung, Taiwan. It is another amazing reason to include Kaohsiung on your next Taiwan vacation.

The beautiful North Gate is also referred to as the Gongchen Gate. This granite gate is complete with two signs above the gate, one on each side. On the outside of the gate it reads Gongchen Gate. On the inside is simply says North Gate.  Just inside the gate is the remains of the old Gongchen Well. It was built over 200 years ago and latter removed.  The well was covered with  an iron lid thatwas placed over the hole.  Enter inside the Old Fongshan City Wall by the North or Gongchen Gate and it is still visible today. What amazing history inside the Old Fongshan City Wall!

The old West Gate is no longer in existence. It was also known as the Dianhai Gate. It was completely destroyed during the Japanese occupation and rule of the island.  Until an old Japanese map was found, the existence of this gate was unknown. In 2004, a monument to the Old West Gate was placed at its location. Thus the four gates of the Old Fungshan City Wall are now accounted for. What adventure there is in Kaohsiung! What amazing living history there is in the Old Fungshan City Wall!

On your next trip to Kaohsiung, take time to walk around the different gates and the sections of the Old Fungshan City Wall that are still standing. Feel the history of a time long past. Imagine the majestic walls with it’s four gates. Dream about living within it’s walls, protected by a moat. This is the living history of Taiwan. Make today the day you get out and explore……The Old fungshan City Wall and it’s granite gates!