Nazareth The Childhood Home Of Jesus 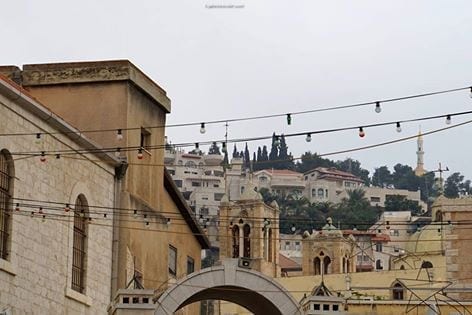 Nazareth The Childhood Home Of Jesus

Nazareth was the childhood home of Jesus, and is considered a major pilgrimage site. It is nestled among the southern mountains of Lebanon. It is a charming town. The area is fertile and green. It is near the border of Israel and its northern neighbor, Lebanon. This gorgeous village is perched on the top of a steep hill overlooking a large lush valley. It is approximately 14 miles from the beautiful Sea of Galilee. Go west approximately 6 miles and you will be on Mount Tabor. What a beautiful place. What a perfect location to call home!

In the first century, Nazareth would have been a quiet village. It was a small village. A village of non-importance. It was not directly on the trade route. This made it an ideal town to raise a family. Those villages directly on the trade route were often lacking in peace when caravans were passing through. During the first century, there was only one main road for traffic between Egypt and the center of Asia. It was the main and only road used for trade caravans.  It passed by Nazareth near the foothills of Mount Tabor, some six miles to the west. This made it close enough to access but the village was not directly affected by daily caravan traffic.  After the road passed the village, it turned north and went on into Lebanon toward  the city of Damascus.

This is the Village of Nazareth that Jesus called his childhood home. A small quaint village on a hill. It was a village set apart and somewhat secluded from outside influences. Only caravans doing business with the village would bother to leave the main route and venture into town. The people of Judea, especially those from Jerusalem, considered themselves better than those who came from the villages of the Galilee region. The Galilee was considered the backwoods of Judea. These were the country hick towns. The socially sophisticated citizens of Jerusalem looked down upon all Galileans. They were considered country folk or backwoods hicks.

It is also interesting to look at the meaning of the word Nazareth. The name “Nazareth” means “separated, crowned, sanctified”. Another meaning meant “the guarded one.” (Easton’s 1897 Bible Dictionary) From what we know about the village and the geography of the time, the name was certainly a perfect fit. Even today, those words would be good words to describe the village, which sits apart from the modern-day Nazareth.

With the above history of Nazareth, we might say that the boy, Jesus, was a normal child of his time growing up in a small village. You might see a growing boy who was slightly rugged and sturdy. One who worked with his father in the carpenter’s shop and assisted his family at home with chores. An older brother who guided his younger siblings. A boy who played simple country games with his childhood friends.  This would have been the childhood of a boy growing up in the village of Nazareth in the First Century. This is what you visualize when you walk the streets of the Village of Nazareth. Even today, the village is secluded and sets to one side of the modern city of Nazareth.

Nazareth is the center of Christianity in Israel. Almost 7,000 people are active members of the Roman Catholic Church. Many more are members of the Greek Orthodox and other Christian faiths. Nazareth is a city of religion and faith. It is a major stop on any pilgrimage to the Holy Land. It is a city that has a rich history and amazing archeology. It is probably best known as the place of the Annunciation, where Mary learned she had been chosen from God to birth the Christ Child.

The new city of Nazareth  has a modern culture with fascinating Middle Eastern Charm. It is still set apart and you must choose to come there. It is definitely still off the beaten path. No pilgrimage would be complete without visiting this Holy Site. Not only is it important for pilgrims, but all those who value the history and archeology of Israel will find it an important place to visit. No Israel adventure would be complete without visiting Nazareth.

The modern city of Nazareth has quality accommodations and excellent restaurants. The food of this region is some of the best. The people are friendly and welcoming. If you have never embarked on an adventure to Israel, this is a good year to do so. You will have a very unique and fascinating experience as you walk in the steps of those who lived thousands of years ago.

Other Articles on Nazareth

The Basilica Of The Annunciation
https://exploretraveler.com/the-basilica-of-the-annunciation/

25 Travel Tips That Can Save Your Life!